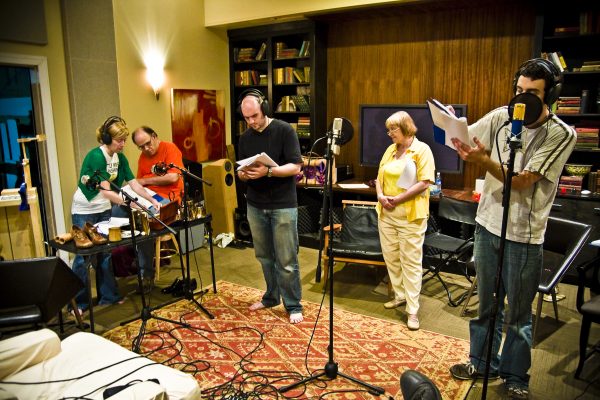 For exactly 10 years — from September 14, 2007 to September 14, 2017 — Chatterbox Audio Theater produced 100 original works of audio theater and audio drama across a variety of genres.

Headquartered in Memphis, TN, Chatterbox launched in 2007 with seven productions. Over the next 10 years, the grassroots organization would record and release new dramatizations of unforgettable literary classics, bold original works, innovative live performances, and more.

Whenever possible, Chatterbox productions relied on simultaneous, unedited performances and manual sound effects created live in the studio. We believe this gave our work the immediacy and vitality of live theater, and it gave Chatterbox’s contemporary sensibilities a bit of the flavor and charm of Old Time Radio.

After achieving nonprofit status, conducting several successful fundraising campaigns, operating its own dedicated studio space, and reaching thousands of listeners around the world, in 2017 Chatterbox’s leadership decided it was time to bring the journey to a close. You can read more about that decision in our official announcement.

This website archives Chatterbox’s decade of production. We hope you enjoy experiencing — or revisiting — these shows as much as we enjoyed making them.