A Christmas fable for grownups. An estranged daughter returns home on Christmas Eve after discovering what she believes to be a message from beyond. Act two of two.

Yes, Snow Globe is Chatterbox’s first-ever attempt at a Christmas show, and yes, it deals with the magic of the season and the idea of the “Christmas spirit.” But don’t expect your standard family-friendly heartwarmer.

Snow Globe is our attempt to bring a little mystery and unpredictability to stories about the holiday. It’s not so much about Christmas as it is about the expectations that go along with Christmas, and about expectations and disappointments in general. Of course, it’s also about family, memory, miracles, growing up, and more. If that sounds like a drag, don’t worry — the marvelous cast is here to keep things entertaining. In fact, for a while, you might forget that this is anything but a rapid-fire Wildean comedy.

The show was rehearsed and recorded over two long days, an abbreviated timeline that, normally, might have made me nervous. But thanks to the quality of the cast and crew, I never had to lose any sleep. This was one of those rare occasions where I was able to book my first choice for every role; in other words, the voices you hear in the show are the same voices I was imagining while working on the script. I was exceptionally lucky to work with Ann, Greg, Jen, and Allen, all of whom went out of their way to be involved. (Allen earns a special mention for driving in from Searcy, more than two hours away.)

Of course, even these great actors would have been lost without our stellar behind-the-scenes crew. Kudos once again to Eric for working tirelessly and thanklessly (well, okay, I thanked him) to draw all the threads together while making the show absolutely sparkle. Seriously, take some time to listen to the incredible richness of the voices in this production. I’m also indebted to the reliably amazing Katherine, who stepped in on very short notice when it became clear that my toy tiger xylophone needed a little boost; and to Shannon, who skillfully mined the themes of the show and created two stunning, evocative, and wholly original works of art.

Naturally, my thanks also go out to the fine folks at WKNO-FM, who once again offered to host us on their wonderful station. Charlene put in lots of work to get everything organized, approved, scheduled, and promoted, and she and Darel were generous enough to add us to their lineup of Christmas-week specials. They even let us rehearse and record in their new building — and Justin was there to make sure we had everything we needed. And of course the warm, funny, brave Kacky Walton gets a gracious thank-you as well, for reasons that will become clear as the show unfolds.

If you’re determined that Christmas is a magical time of uninterrupted kindness and goodwill, then Snow Globe may not be for you. But if, like the rest of us, your perception of the season has grown more complex over the years, then give it a listen. It may just feel like an unexpected gift. 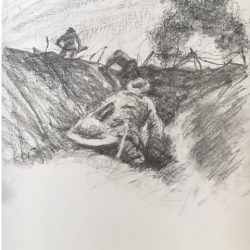 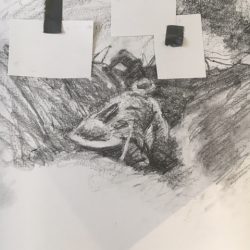